When Doing a Crappy Job Is a Good Thing 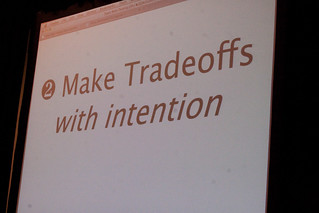 I hear this plea from nonprofit communicators all the time: “There is way too much stuff to learn and do in this job. How do I cover all the bases when it’s just me and there is no additional help in sight?”

At a recent conference, in response to a similar question, I replied this way:

Choice A is you pick one communications channel like your email newsletter or Facebook or your blog and really nail that channel for, say, a month or two — really focus on it, learn what you need to know, incorporate best practices, and get your system in place so it’s easy to maintain — while phoning in (or even ignoring or doing a crappy job on) everything else during that time. Cycle through all the channels that really need your attention until it feels better.

Choice B is keep doing a half-hearted or lame job on everything, all the time, but at least you get something done everywhere you are supposed to be.

I strongly recommend Choice A. With that approach, by the end of a year, you would have upgraded your performance on all of your communications by giving each channel some concerted focus and energy. With Choice B, you are still doing a lame job on everything at the end of the year.

Yes, it’s  tradeoff. Choice A comes with risks of failure on those communications channels you are ignoring. Something bad could happen on Twitter while you are ignoring it to focus on Facebook. But Choice B comes with pretty much guaranteed failure across the board.

When I said this out loud, half the people smiled, relieved to have a solution that gave them permission to be pragmatic and to catch their breath. The other half gasped (appalled that I would suggest they do a crappy job on anything) or sighed (knowing their higher ups would never consent to the approach). Hint: If your higher ups don’t really pay that much attention to communications anyway, they probably won’t even notice. Just do it.

What do you think of this choice?